The Great Salt Lake is located in Northern Utah, and is the largest lake in the western United States. It is the 6th biggest lake if you include the northeast region of the United States. This giant lake spans across five counties including Box Elder, Weber, Davis, Salt Lake, and Tooele. It can be seen from both freeways I-80 and I-15. Most residents of Utah live close to the lake. The majority of Utahns know little about the Great Salt Lake, other than it smells. Brine Shrimp are wildly abundant in the Great Salt Lake. Just about any Utah resident can tell you that. What most people don't know is there is a good population of fish in and around the lake. Because of the salinity level in the lake, it is difficult for fish to survive there. Although under the right conditions fish do live in the lake.  Several types of fish get washed downstream into the Great Salt Lake every year. Large rivers such as the Bear, Weber, Ogden, and Jordan flow into the lake. During heavy runoff times fresh water will mix with the lake providing a short term ecosystem for fish to live in. Back in the 1980's fish lived in some bays for years at a time. Then the salinity level raised, which killed most the fish.There are some ponds and springs attached to the lake which contain fish year around. Locomotive Springs is located on the northern tip of the lake. It is made up of Sparks, Spring, Off Spring, Teal Spring, Bar M Spring, Baker Spring, and West Locomotive Spring. About half of these springs contain carp, and a few are stocked regularly with rainbow trout and Least Chub. The fresh spring water mixes with the Great Salt Lake. The trout hang out in the fresh waters of the springs, but the carp and Least Chub will swim down farther into the salty water. On the southern tip of the lake are the I-80 bass ponds. These ponds are located next to the viewing area, where highway 201 and Interstate 80 meet. In the early 2000's, there were some huge bass in the I-80 ponds; although once word got out the small ponds were quickly over fished. In 2018 rotenone poisoning was applied to the Bear River Bay marshes. There was a good population of carp that was being removed. The Utah record catch of Carp was caught here in 1960 and weighed 30 lbs. This record wasn't broken for 33 years. Here is an article from 1986 about some fish that were surviving in the lake. There is a small pond on Antelope Island that is stocked with Least chub. The fish were stocked in 2004, and lived for several years until a drought. Then in 2011 the Least Chub was stocked in Garden Creek. Which is a more drought resistant part of Antelope Island.

In 1949, Senator Arthur V Watkins and Representative Walter Granger passed the Weber Basin Project through Congress. Part of that project was the creation of fresh water reservoir, Willard Bay Reservoir. In 1957, a large portion of the Great Salt Lake was drained and construction began. A dam which was 36 feet high and 15 miles long was completed in 1964. The Weber and Ogden rivers flowed into the bay, carrying freshwater and more importantly fish. Plans are being developed now to enlarge the reservoir.

Brine shrimp is a multi-million dollar fishing industry on the Great Salt Lake. The female Brine shrimp have the ability to produce both live young or eggs. Which is pretty awesome. In warmer months when there is more food live young are born. In the colder months eggs are hatched, which are called cysts. The cysts are then collected by commercial fisherman. Once processed and dried, the cysts can last up to several years at a time. Then when they're introduced to water, they spring to life. If you have ever purchased sea monkeys, this is what you experience. Most of the brine shrimp cysts become food for fish and shrimp farms. They get shipped all over the world.

In 1904, a railroad bridge was built across the lake. This ran from the east near Ogden to the west side of the state. In the 1950's, the bridge caught on fire and was replaced with a causeway. The causeway was made from dirt and rock.This separated the north and south areas of the lake, which we call arms. Most of the freshwater coming into the lake empties in the south arm. The southern arm of the lake has a salinity level of about 11 to 12 percent. This means that 11% of the water is salt or sodium chloride. In comparison the ocean has a salinity level of about 3.4%. The northern arm of the lake has a salinity level between 25 to 30 percent. Due to very little fresh water coming into the north arm. So in late 2016, the causeway separating the two arms was opened. The causeway breach caused water to flow from the higher south arm to the north arm. Water levels in the north arm had dropped by more than 3 feet before the breach.

The Great Salt Lake has a long history of pollution. For years, sewage has been dumped into the water. One of the biggest polluters of the lake was Magcorp, located on the west shores of the Great Salt Lake. Magcorp has been named the top air polluter in the United States multiple times. After several lawsuits, the owner, Ira Rennert stole a bunch of money from the company. Then the company couldn't pay it's fines for polluting. Afterward he just re-opened it under a new name of US-Magnesium. If you take the Skull Valley exit from Interstate 80 and head north you will run into the facility. It's easy to tell which employees have worked for the company for a few years; the paint on their vehicles is peeling off due to pollution. The lake also has extremely high levels of mercury. Due to both mining pollution and naturally occurring mercury. Since 1847, the water level of the lake has shrunk in half. Since 2011, the lake has shrunk by 40%. This is mostly due to dam's being built on the rivers that flow into it. With less water flowing into the lake, salinity levels will increase. This will have a huge impact on the ecosystem. Increased salinity will affect the shrimp. Thousands of birds rely on the shrimp as a meal while they migrate across the lake. If the lake dry's up it could have a major impact on local ski resorts. The picture below was taken near the viewing area on I-80. Not long ago this area was full of water. Now even in the spring time when the snow melts, this area is dry. 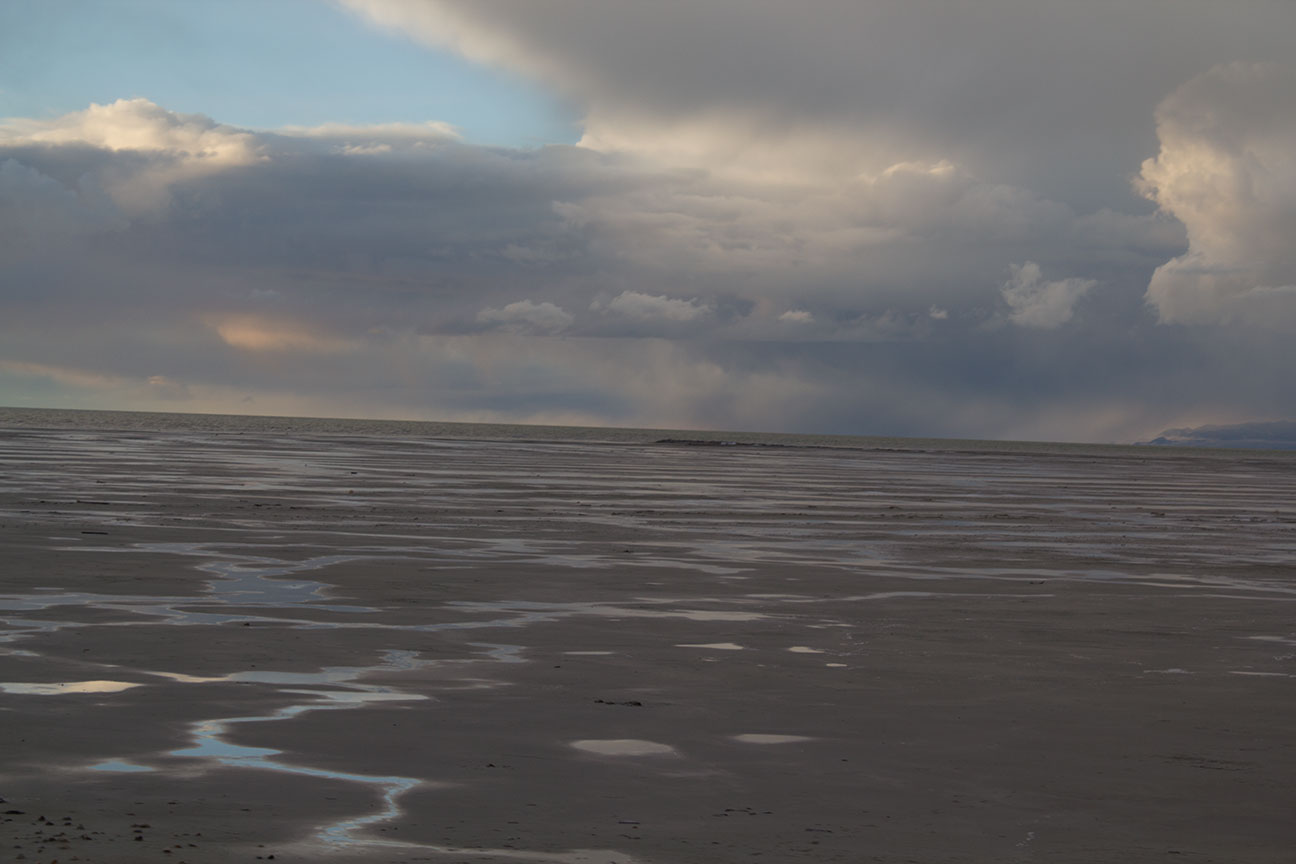