Porcupine Reservoir also known as "The Pig" to locals, is located in Cache County, Utah. From Paradise, Utah take Highway 165 south for about 7.5 miles. In the winter time the road is plowed to the dam. I've seen several trucks stuck while trying to venture further down the snow packed road past the dam. Rainbow trout is stocked every year and is the most likely catch. There is a large population of kokanee salmon although they can be more difficult to catch. Supplemental stocking of kokanee occured in 2005, 2006, and 2007. In 2015 Splake were introduced into the reservoir and have been planted nearly every year since. In 2016 there was a small amount of brook trout planted. There is also a self sustaining population of brown trout in the reservoir.

Each fall typically around the 3rd week of September the kokanee salmon will spawn up the river. This is great event for kids as the fish are highly visible in the river with their red spawning colors.

Updated for the 2021 fishing season. Open to underwater spearfishing for game fish from Jan. 1 through Dec. 31. Unless otherwise noted, you may use spearfishing to take any legal species within the daily limits. Limit 12 trout and salmon, only 4 may be rainbow, cutthroat or brown trout (a combined total). To take 12 fish, you must possess at least 8 salmon. Anglers may not possess kokanee salmon from Sept. 10 through Nov. 30. Operating a boat above a wakeless speed is prohibited.

Porcupine Reservoir is listed on the Utah Fish Advisory for high levels of mercury in Brown Trout.

Porcupine Reservoir was a key player in helping shape the rainbow trout species selection in Utah. In 1978 six different species of rainbow trout were tagged and planted into the reservoir. The fish were then measured throughout the year by the DWR and the USU, Utah cooperative fishery research unit. The data obtained from the study helped immensely in future fish species selection. 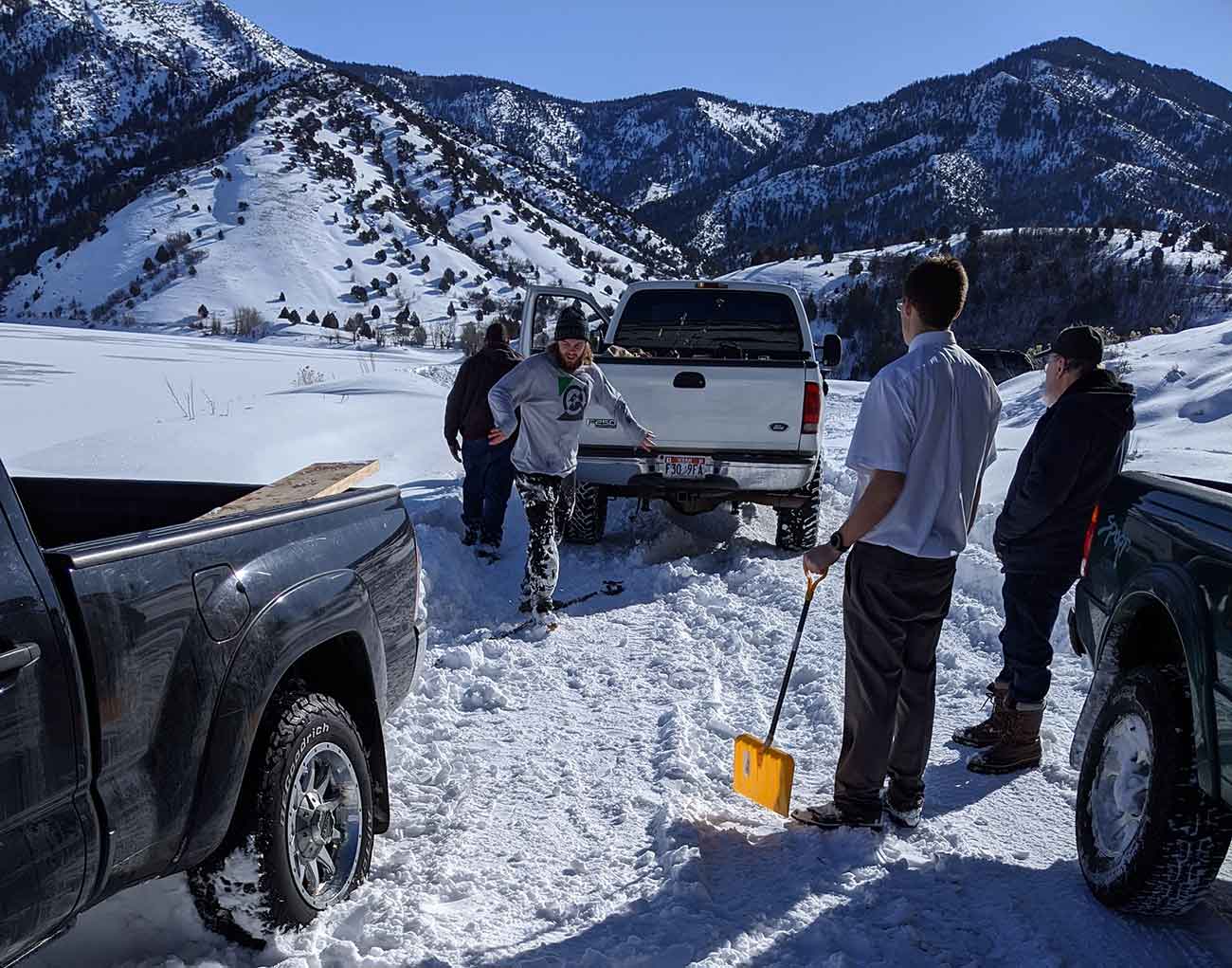 The Ford pulled several stuck trucks out of the snow in 2020.

In late fall of 1962 a dream that was fifty years in the making was finally realized. this dream was the "Porcupine Dam". Construction contracted by the Strong Company of Springville, Utah, began on July 5 1961 at a cost of $533.546. It was financed by the Utah Water and Power Board (now the Utah Division of Water Resources), Utah Fish and Game Department, Department of Agriculture, and the newly formed Porcupine Reservoir Company.

The first Dam if its size in Utah, it called for one million cubic yards of earth fill and contained 12,800 acre feet of water making possible the irrigation of 3,000 acres that had never before seen water.

In the fall of 1998, extensive renovations were begun in order to bring the reservoir up to current state dam safety standards. The renovations were completed by Gilbert Western Company of West Jordan, Utah in the spring of 1999 at a cost of approximately $5.5 million.

Were You Looking For: Porcupine Reservoir, Summit County (private Property) or Porcupine Lake in Iron County? Check the search bar at the top of the page to view other lakes.